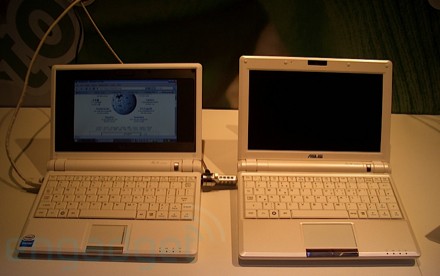 Time to buy an Asus EEE PC? It sure does look tempting with that bigger screen! 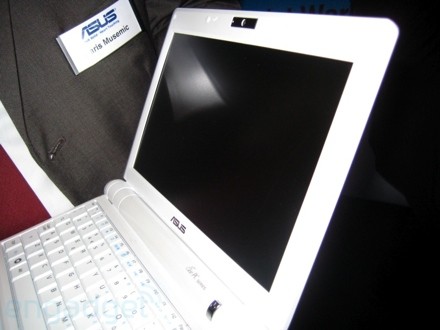 If you hadn’t guessed from the headline, and as rumored just an hour ago, there’s 9-inches of LCD on this thing. Actually, 8.9, but who’s counting? We found out that and a few other little tidbits about this Eee PC “New Generation” at the ASUS booth just now, but for the most part the 9-inch Eee PC is quite similar to its 7-inch forebearer. Anything past that ASUS is saving for tomorrow’s press event when this laptop will become officially official, but whatever they end up calling it (Eee PC 900 is rumored), it’s certainly for real. The battery impact of the new display is said to be “negligible,” with 2.5 to 3 hours of battery quoted. ASUS wouldn’t let us turn it on since it’s all so very secret at the moment, but they did confirm some release details. The 9-inch Eee will hit in the “middle” of 2008, with that â‚¬399 pricetag for the 12GB version, but other capacities available (we saw an 8GB on display). No word yet on US pricing, but we’re trying to pry it out of them.

Images and Original Story From Endgadget