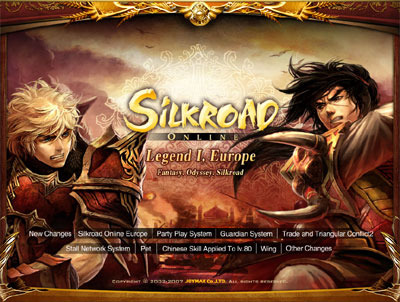 Lately, I’ve been putting quite a bit of time into Silkroad Online. Its FREE TO PLAY although there are cool stuff to be found in the item mall. AND the new SRO patch Legend I, Europe is soon to hit the live servers. I’m psyched up about the new Guardian system, the new classes and the new party system, additional pets, Wings feature for winged characters, and an improved interface.

Unlike Chinese who are based on solo playing, European race is based on the role play aimed at the party play system.
Party play of European race is divided into each role and they are listed below.
Puller : Role of pulling the enemy. Pulling applicable numbers of monsters using medium, long ranged skills.
Tanker : Role of taking over the damage for puller instead. Based on a great defensive power, tanker taunts the mob which puller has pulled over.
Nuker : Role of helping the partyâ€™s hunting by killing the taunted mob by tanker with great power damage.
Healer : Role of healing party members during the fights with other supporting buffs.
– Extra experience points are gained when the numbers of party members increase.
– After applying Europe, changed experience points penalty is applied when hunting
– After applying Europe, Silver/Gold Time are both applied to exp auto share party
– After applying Europe, modified experience penalty is applied when hunting
– Party monsters will appear when you hunt under an exp auto share party.
– Party monsters have greater HP than normal monsters, and have better attacking power with higher damages.
– Party monsters disappear if they are not attacked for 5 minutes from the time they are spawned.
– The range of recognition of party members in an area will increase from 70 meters to 100 meters.

Here are some of the changes in Silkroad Online when the Legend I Europe hits the live servers: