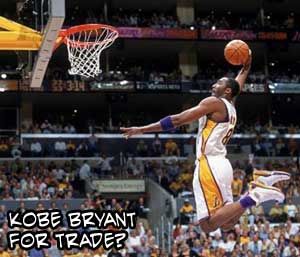 Kobe Bryant requests a trade but changes his mind after talking to his coach, Phil Jackson. When will the Kobe drama end? Kobe says he’s fed up with LA ? Talk about being ironic. Black Mamba strikes again. Remember? the Lakers stuck with Kobe when they traded Shaquille O’Neal and the support they gave him during his rape case. But lets be fair: Kobe says the Lakers haven’t been exactly holding up their end of the bargain, which is to build a championship caliber team around Kobe.

Hours after Kobe Bryant asked for a trade on Stephen A. Smith’s radio show, he backed off after talking to Phil Jackson and told Dan Patrick he wants to be a Laker for life.

Here’s how all of this started:
First, Bryant was interviewed on 1050 ESPN Radio in New York: “I would like to be traded, yeah. Tough as it is to come to that conclusion there’s no other alternative, you know?”

Kobe Bryant was being interviewed by Stephen A. Smith, who asked if there was anything the Lakers could do to change his mind.

“No,” Bryant to Smith. “I just want them to do the right thing.”

“[The Lakers] obviously want to move in a different direction in terms of rebuilding,” Bryant said, adding he could have opted to sign with the Los Angeles Clippers or Chicago Bulls instead. “Three years ago when I was re-signing they should have told me they wanted to rebuild.”

D’oh. If you’ve got Smush Parker and Kwame Brown starting for your team then i think there’s a good chance your in rebuilding mode, buddy.

Dan Wetsel of Yahoo Sports says it may be justified, while ESPN’s Stein attempts to answer some of the nagging questions.

2 thoughts on “Kobe Bryant to be traded by the LA Lakers?”