Finally! An anime based on the Highlander franchise. Wanna bet it’s a lot better than Highlander 5: The Source? Directed by one of my favorite directors, the director of the original Ninja Scroll and Vampire Hunter D Bloodlust himself: Mr. Yoshiaki Kawajiri. 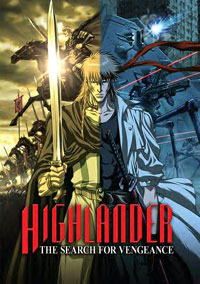 Colin MacLeod, the immortal Scottish Highlander, travels with the druid ghost Amergan seeking Marcus Octavius, who killed Colin’s lover centuries ago on the Celtic plains. With Marcus ruling in a dominant fortress that towers over a virus-infected, water-submerged New York, will MacLeod help the oppressed freedom fighters or seek vengeance for his lover’s death?

More info after the jump.

Highlander: The Search For Vengeance is an animated spin-off of the cult hit film, Highlander. It is directed by the acclaimed Japanese director, Yoshiaki Kawajiri (Ninja Scroll, Vampire Hunter D: Bloodlust) and written by David Abramowitz, who was also the writer for the Highlander: The Series, Highlander: The Raven and upcoming Highlander: The Source. Madhouse Studio produced the animation, where Yutaka Minowa was a key character designer. Produced in association with Davis Panzer Productions, this Highlander film is being distributed by Manga Entertainment on the 5th of June, 2007.