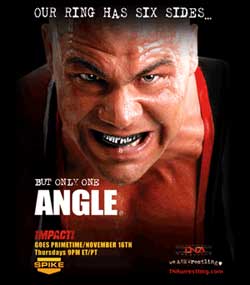 After the Samoa Joe defeated Jeff Jarrett in the main event, Jim Cornette came out and showed a pre-recorded video package – showing Kurt Angle working out in a TNA ring! That’s right – TNA’s Major Announcement is that they have signed Olympic Gold Medalist, KURT ANGLE. Jarrett looked stunned in the ring as fans chant “Angle, Angle” as the PPV ended. TNA’s official website currently features a graphic of Kurt Angle that reads “OUR RING HAS SIX SIDES … But Only One ANGLE”.

Angle was reportedly released by the WWE after Angle’s request. It was said that Angle wanted to recuperate and rest his body….and now this?