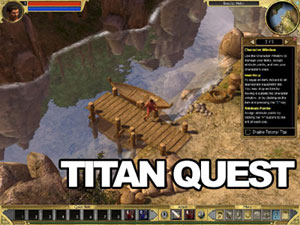 Update:
The patch release has been moved to july 7th (or 8th depending on where you are). Full patch notes here. and yes, Titan Quest is now available at your local Datablitz outlet. But wait for the patch first, Pinoy action RPG gamers. Dont say i didnt warn you. =)

Initial Impressions:
Part Diablo, Part World of Warcraft and Part Dungeon Siege. mix ’em with a bit of Greek history and you get Titan Quest. Thats the good part, the part bad is that numerous users (including me) have been reporting random crashes, corrupted saves and missing textures to THQ via their official forums over at IGN. So better wait for a patch (it comes out July 5th US time) to see if things have stabilized a bit.

Review
If you know your Greek history then you know that the Olympians (Zeus, Hera etc) gained their place in world by overthrowing the Titans, who ruled the world before their offspring imprisoned them in Tartarus. In Titan Quest, The Titans have found a way to break free of their shackles and seek revenge on the Olympians and their precious mortals.

If youve played the Diablo series then you might be familiar with the combat system. Good old Hack and Slash goodness awaits those who take up the quest to stop the Titans from destroying the world. Enemies drop loot which, most of the time, you can see them actually holding or wearing. So, if you see a big ass cyclops with a big ass club then there is a chance that you might get that weapon for your own use.

Unlike the Diablo series however maps arent randomly generated, which is both a good and bad thing. Good because each are is carefully designed and lets you in the mood. Bad because once youve dragged you armor across those maps, its pretty much the same adventure.

Titan Quest does have multiple difficulty levels like the Diablo series but a lack of a secure and stable server to store charcters and host games really is a downer. Also, be wary of bugs and crashes due to a variety of issues.

All in all, Titan Quest is a good game to pass the time until we get a glimpse of the next iteration in the Diablo Series. Action RPG fans dont want to miss this one.