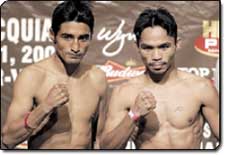 Filipino boxing star Manny Pacquiao will rumble with Mexican nemesis Erik Morales on November 18 at the Thomas and Mack Center in Las Vegas, Nevada, in a rubber match that will decide who is the superior fighter between them.

Top Rank chief Bob Arum, who has a promotional contract with “El Terrible,” formally announced the schedule of the much-awaited Morales-Larios third bout in the company of Shelly Finkel, the Filipino pug’s American manager. Arum said the fight is set for 12 rounds at 130 pounds and will be aired live on HBO pay-per-view. Pacquiao and Morales have split their previous two fights.

But while Morales won the opening match against Pacquiao by unanimous decision on March 19, 2005, the proud Mexican took a terrible beating at the hands of “PacMan” in their rematch on January 21. Well-trained and mentally focused, Pacquiao demolished Morales in 10 rounds—the first time that the pride of Tijuana, Mexico, was knocked out in his colorful career.

“Erik is very determined and he is anxious to take on Pacquiao for a third time,” said Arum. “These two great champions have always given it their all, each and every second in the ring, especially against each other. I expect this third fight to be the most exciting of the trilogy—and that’s saying something!”

“Manny will start training in August. He is thrilled to have this rubber match to show he is the better man,” Finkel said. Pacquiao is fresh from a masterful conquest of Oscar Larios on July 1, knocking down the outclassed Mexican twice en route to a clear unanimous decision victory. Pacquiao has gone 16-1-2 in his last 19 bouts, with all 15 of his victories coming by knockout, including a sensational stoppage of world junior lightweight champion Marco Antonio Barrera. Morales, who recently became a new father, is a former World Boxing Council super bantamweight champion, two-time WBC featherweight champion and WBC super featherweight champion. Morales became the second fighter from Mexico to win world titles in three weight divisions—Julio Cesar Chavez was the first.

Nick Kahn, Finkel’s comanager, disclosed while he was in Manila that Pacquiao will receive no less than $4 million for fighting Morales a third time plus a hefty cut of the pay-per-view revenue. A total of 750,000 subscribers combined watch the two first Pacquiao-Morales fights.

Pacquiao and Morales are likely to see each other on July 15 at the MGM Grand Hotel outdoor arena in Las Vegas for the rematch between Sugar Shane Mosley and Fernando Vargas. The Filipino fighter has been tapped by Solar Sports to be one of the ringside annotators when compatriot Randy Suico battles defending champion Juan Diaz for the World Boxing Association lightweight championship in the undercard of the Mosley-Vargas fight. Eric Pineda, one of the key officials of Manny Pacquiao Promotions, said Pacquiao was booked to leave for the US on Saturday and then return to the Philippines on Tuesday to fulfill another commitment.

Morales has also been invited to watch the Mosley-Vargas bout.