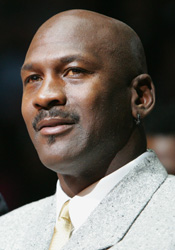 Michael Jordan is back in the NBA.

ESPN reports that Michael Jordan just became the No. 2 owner of the Charlotte Bobcats on Thursday in a deal that gives him a stake in most of Robert Johnson’s investment ventures. Johnson promptly named Jordan managing member of basketball operations.

Uh-oh, Im pretty much a hardcore Jordan fanatic but as VP of basketball operations: he stinks. Just ask the Washington Wizards (and Kwame Brown, the Detroit Pistons and Rip Hamilton for that matter). And why Charlotte of all places? i know its MJ’s home state but still WTF.

I sure hope you know what youre doing, idol.