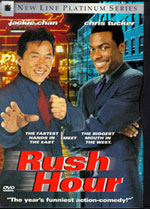 My favorite film series is gearing up for a third installment. I hope Jackie and Chris still have the chemistry.

IGNFF: Can you give us any idea what the storyline will be in this one?