A female protagonist and funky combat system all in HD? sounds good to me!

from IGN
Final Fantasy XIII is not a prequel or sequel to the other two FFXIII titles announced today in the traditional sense. As Square Enix explained, they’re linked through a common mythology but do not have any common characters, worlds, or stories. They all take place in the same universe, but aren’t related to each other directly.

The video trailer of Final Fantasy XIII shown at Square Enix’s press conference was longer than the one shown at Sony’s later in the day. It featured a futuristic world with a female protagonist who kicks some serious ass with a short sword-gun combo, similar in appearance to Squall’s Gunblade from Final Fantasy VIII. It started with her soaring through a city and then followed her on to a train as she fought soldiers in a battle where she was clearly outnumbered. The train sequence ended with a giant mechanical scorpion-esque monster attacking from above. 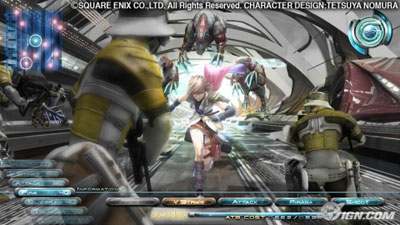