Pacquiao vs Diaz Live Results – Round by Round ONGOING LIVE!!!!!! . Courtesy of ESPn and Live Cable 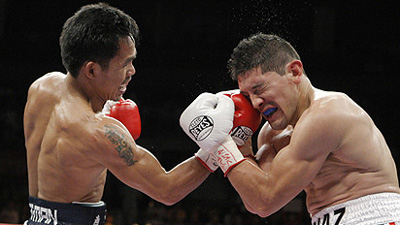 MANNY PACQUIAO KNOCKS OUT DAVID DIAZ in the 9th!!!!!!

Round 1
Manny Pacquiao saying a last-minute prayer as Filipino national anthem is sung. David Diaz decked out in white from head to toe. Chants of Manny! Manny! fill the arena. Diaz is 148 pounds tonight; Pacquiao, 147. PacMan making his way to the ring, pausing momentarily to shadow box. The boy is fired up. Cue the mariachi band! Here comes Chi-town’s finest. Fernando Vargas by his side. Kieran Mulvaney told me yesterday that he “couldn’t keep his eyes off of Vargas. It was like seeing Fat Elvis.” Vargas was a teammate of Diaz’s in the ’96 Olympic Games. Vargas can’t seem to keep up with Diaz on the way to the ring. Fighter introductions. Pacquiao introduced first. Diaz stoic in his corner. And we’re off. Diaz moving forward. The men lock up in the center of the ring. Manny jabs, then follows up with a pair of lefts. Diaz still coming forward. Manny circling; stops, throws a combo, then it’s back to circling. Nice body shot by Pacquiao. Pacquiao opens up with a salvo of punches. Diaz responds with a slow combination. Pacquiao lands a hook/uppercut. Diaz walks into a jab. Pacquiao is sharp. Diaz tucks his chin and forges ahead. Pacquiao throwing all sorts of combinations. Thirty seconds remaining in round one. Pacquiao opens with a flury. Diaqz nods. Diaz blocking with his gloves and hard head. Diaz jabbing.

Round 2
Pacquiao lands the uppercut to begin Round 2. Nice body shot by Diaz to stifle the attack. Diaz interrupts a Pacquiao flurry to land a left. Diaz is blocking many of Pacquiao’s punches. Diaz is picking his spots. Pacquiao with a mean left cross as Diaz barges in. Three uppercuts by Pacquiao. Pacquiao fighting ulta aggressively now. A right and a left by Pacquiao. Diaz responds with his own right. Diaz appears to be bleeding. The men lock up. Pacquiao jabbing. Diaz coming forward at the bell.

Round 3
Diaz storms out of his corner to begin Round 3. Pacquiao is there to engage him. Pacquiao ripping uppercuts. Pacquiao fighting with intensity. Diaz misses an uppercut and the fighters clinch. Pacquiao on his toes and coming forward. Diaz looks confused. Pacquiao throwing jabs as Diaz rakes the body. Pacquiao back to the uppercut. Diaz lands a left that catches Pacquiao’s attention. The men tie up. Pacquiao lands a hook, then throws an uppercut. Pacquiao fighting like a 7th-grader who just finished serving three hours of detention. He’s bouncing off the walls. Diaz finally standing his ground.

Round 4
Diaz looking to get on the board this round. Diaz working the body. Diaz walks into a hook. Pacquiao moving back but still landing. Vic Drakulich stops the count momentarily so cut on Diaz’s nose can get a look. Back to work. Pacquiao stuns Diaz with a hook. Uppercut, uppercut, uppercut, hook for Pacquiao.

Round 5
Dan Rafael has Pacquiao pitching a shutout so far. Pacquiao working the jab to begin Round 5. Pacquiao showboating a little now. Diaz walks into an uppercut but he takes it well. Diaz still marching forward. Pacquiao landing at will. Diaz bobbing and weaving into punches. Pacquiao can’t miss Diaz now. Diaz bleeding badly from his left eye.

Round 7
Both men warned for rough tactics. Diaz rushes in and is met with a jab. Diaz trying to punch in the clinch. Pacquiao counters another Diaz onrush with a well-timed right hook. Diaz resolute. He’s still moving forward. Pacquiao throwing everything at Diaz now. He’s done throwing jabs.

Round 8
Pacquiao lands a hook as Diaz steps back to begin the round. Both men unleash jabs. Pacquiao just misses with an uppercut. Big left hand hurts Diaz against the ropes. Diaz’s face a mangled mess now but he’s still firing. Pacquiao pins Diaz against the ropes and throws heavy leather. Pacquiao stalking; Diaz covering up. Diaz has stopped throwing back now. Pacquiao stalking; looking for that one big punch. Pacquiao lands a salvo; Diaz blocks some with his gloves but a few get through.

Round 9
Diaz’s last stand. What does he have. Pacquiao pumping the jab. He’s looking to set up the left. Diaz still throwing. Pacquiao lands a nifty left on Diaz’s ear. Diaz stops for a moment and Pacquiao blasts him with a left. Diaz on his heels courtesy of a Pacquiao shot. How is he still standing? Diaz stumbles forward. Pacquiao teeing off. Diaz’s trunks a sickly pink. Pacquiao lands a whistling left hand on the chin. Diaz pitches forward and lands face first on the canvas. That’s it. Referee Drakulich stops the fight.

2 thoughts on “Pacquiao vs Diaz Live Results – Round by Round”