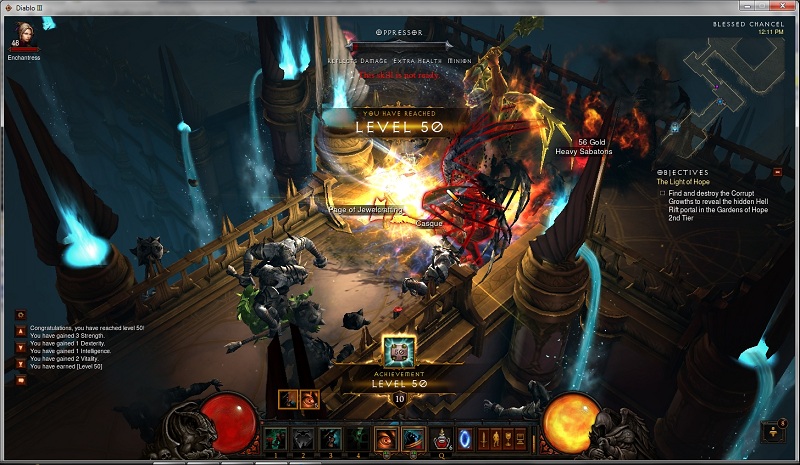 Check out an extensive Diablo III Strategy Guide of Tips and Tricks: , some are basic tips (not cheats or exploits as these are frowned upon by Blizzard and may get your account banned), some are more advanced and require more skills, check out the list: 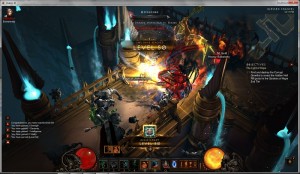 If you’re playing as a ranged character, sometimes you’ll accidentally click on the ground instead of the enemy you’re trying to attack, and end up charging towards them. To avoid this, and keep your character in place, hold the shift key while attacking.

Dungeons will always consist of the same number of floors, but every time you play them, the layout and locations of treasure, shrines, and healing wells changes. Enemy placement is also randomised, as is their HP, but they’ll always be of the same level.

Always adjust your strategy depending on your goals, Some combinations work better if you’re into loot mode or if you’re just on elite/boss runs in Nightmare/Hell or Inferno. Don’t bother to do runs in Normal.

Wizards’ signature spells don’t use any arcane power, so you can keep casting them without pausing. The wizard has the fastest mana recharge rate of all the classes.

Use the Auction House to your advantage, Buy low, Sell high if you want to profit from it when the Real Money Auction shop opens on May 29th.

Grey items are worthless. White items are usable, but have no magical enchantment. Blue items have at least one magical property. Yellow items are rare, and have a higher base stat, and a greater number of enchantments, than blue ones. Orange items are legendary, and are never randomly generated; they always have a unique name, and specific properties. Green items are also legendary, but are part of a matching set. Collecting a whole set of green gear grants you a special bonus.

If you choose to dual-wield, you’ll get a 15% bonus to your attack speed.

Your followers never die. If defeated, they’ll drop to one knee. After 10 seconds, they’ll revive themselves. Any health globes you pick up will heal your companion.

In co-op, gold and loot are unique to you. Items dropped by monsters or chests are yours and yours alone, and only you can see them on the screen. If you take an item and drop it on the ground, it’ll be visible to everyone.

If you aren’t using voice chat, you can still communicate with other players. Use the numeric keypad to select from a variety of useful stock phrases. Thanks, sorry, etc.

You can equip your followers with weapons, shields, amulets, and special items specific to each type. Press the F key to bring up their inventory and abilities.

If one of your party dies while playing co-op, left click on them to revive them. This will save them having to run back to the battle from the last checkpoint. Be careful, though: if an enemy hits you while you’re reviving a friend, you’ll be interrupted and will have to start the process all over again.

Sell white/ grey items to merchants, but not blue ones. It’s better to take these to the blacksmith and break them down into crafting materials using the salvage tab.

After every dungeon, make sure to get your equipment repaired. Any merchant can do this for you, for a small amount of gold. Just click on the hammer tab on the trading interface. You can find out how damaged your weapons and armour are in the item’s stats.

If you want to show an item to your party, click on the chat window, and then shift click it. The item will be linked, and other players and click to see its stats. This feature has been borrowed from World of Warcraft.

Recipes for legendary items are sometimes dropped as loot, from slain enemies, or other sources. You have to find these and give them to your artisans before you’re able to craft the items in question. They can’t learn them through training, even at the highest level.

Champion monsters are bigger, stronger versions of normal ones. They glow blue, and work in groups. Rare monsters glow yellow, and have unique names. They almost always drop quality loot when slain. Minions are normal enemies, but have boosted stats when escorting a rare monster. Unique monsters appear at specific points in the story, sometimes randomly.

Enemies with the knockback trait have a chance to send you flying backwards when they attack. This has the same damage as a normal attack.

Enemies with the jailer and waller traits can trap you. Jailers freeze you in place briefly, while wallers create a barrier around you that limits movement.

You don’t have to keep clicking to attack an enemy. Spare yourself the RSI by just holding the button down. Your character will keep on attacking until they’re dead.

You don’t have to pick an item up to see its stats. Just hold the ctrl key while hovering over it with your mouse and you can tell whether it’s worth bothering with.

If you’re playing as a wizard, the Power Hungry passive skill is extremely useful. Every time an enemy drops a health globe and you pick it up, it’ll restore 30 arcane power points.

All transactions in the Auction House are completely anomyous. Whether you’re buying or selling, you’ll never see another person’s name or BattleTag.

You only have to upgrade your artisans once: they’ll retain their level for all of your characters. Gold is also shared between heroes, as are items stored in the stash chest. You can expand your stash in exchange for gold, but if you don’t want to foot the bill, you can create alternate characters to use as ‘pack mules’. This is more time-consuming, but free.

Unlike loot, health orbs dropped by enemies are seen by all players. You don’t have to fight over them, though, because picking one up will heal you AND all other players in the vicinity.

You’ll find books scattered around the environment. Sometimes they’ll be in buildings, lying on a desk for example, or occasionally they’ll drop from containers. Even if you don’t care about the story or the lore, these are still worth picking up because they net you XP.

You can show enemy health bars by pressing V, or player health with D. Press Z to zoom in on your character, and tab to bring up the map. Key bindings can all be customised. For example, we have inventory and skills assigned to the side buttons on our mouse, and health potions to the scroll wheel button.

You can’t save manually. Your hero’s stats, equipment, and settings are saved automatically, and backed up on the Battle.net servers. Your progress is auto-saved when you finish quests or reach checkpoints. Annoyingly, if the server boots you off, or your internet connection drops, you’ll lose any progress you made between checkpoints.

Combat bonuses award bonus XP for certain acts. These include killing a certain number of enemies in a row, rapidly destroying a large quantity of objects (e.g. barrels), or surviving a battle on low health. These flash up regularly, but grant a relatively small amount of XP.

Sometimes you can use the environment to kill enemies. Look for chandeliers, log traps, and flimsy walls. Hit them once and they’ll topple over, crushing enemies for an instant kill, and giving you a combat bonus. Don’t worry; they can’t hurt you.

Source: Andy Kelly for computerandvideogames.com and our own Diablo 3 gaming experience.