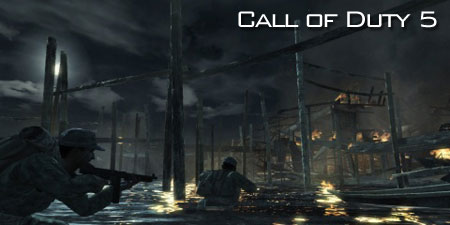 Call of Duty: World at War is the newest in the Call of Duty series and is developed by Call of Duty 3 dev Treyarch. Now, i know CoD 3 don’t get the best reviews but to the developer’s defense, it looked like they didn’t had enough time to polish the title. With COD5, they started the game on the CoD4 Modern Warfare engine one year before COD4 was released. 2 years should give them enough time to correct their past mistakes and give us a proper successor to COD4.

And yes, COD:WaW will be set again in World War 2. Why World War 2? The developers say that they will specifically explore the pacific side of the war that should include both of these elements in abundance: jungles and fanatical ww2 era japanese soldiers.

Imagine walking through a dense forest when suddenly camouflaged japanese soldiers jump up from underground hiding places or snipers, who tied themselves to trees, start pummeling your division with precision fire. You can use flamethrowers to remove the foliage to minimize cover for the japanese forces, just take note that you’re still lugging along gasoline in your pack.