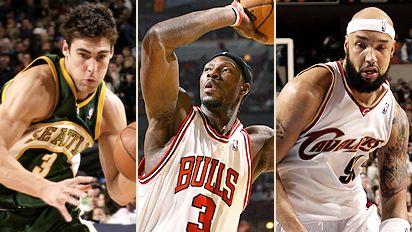 Danny Ferry finally pulled off a big deal: 11 players involving 3 teams. The question is: will this trade appease King James?

CLEVELAND — LeBron James finally got some help to win an NBA title.

In a complex, 11-player trade involving Cleveland, Chicago and Seattle, the Cavaliers acquired center Ben Wallace from the Bulls and forward Wally Szczerbiak from the SuperSonics, two players to possibly get James and the Cavs through the Eastern Conference and back to the finals.

Cleveland general manager Danny Ferry, unable to finalize major deals in the past, pulled off a colossal one as the clock ticked down in the final hours before Thursday’s 3 p.m. deadline.

The Cavaliers sent guard Larry Hughes, forwards Drew Gooden and Cedric Simmons, and guard Shannon Brown to Chicago for Wallace, one of the game’s top inside enforcers, and forward Joe Smith.

The Cavaliers will also get Chicago’s second-round pick in 2009. The SuperSonics will receive guard Adrian Griffin from the Bulls.

The deal caps a busy month of trades around the NBA as several stars, including Shaquille O’Neal, Jason Kidd, Shawn Marion and Pau Gasol, all were dealt to new teams. The Gasol swap triggered an arms race of sorts among the Western Conference’s top squads, while this one could have a big impact at the top of the East.

Plagued by injuries this season, the Cavaliers are nine games behind Detroit in the Central Division and are fourth overall behind Boston, the Pistons and Orlando in the conference standings.

James, who is having an MVP-caliber season, had hoped Ferry could pull the trigger on a deal as the deadline neared. But Cleveland’s superstar probably couldn’t have imagined such an overhaul.

Ferry traded 60 percent of the starting lineup Cavs coach Mike Brown sent out on the floor for Wednesday night’s game in Indiana.

In the 33-year-old Wallace, the Cavaliers are getting a defensive intimidator. But Big Ben will give them little or nothing on offense. He was a disappointment for the underachieving Bulls, who enter Friday’s game 17Â½ games out of first in the Central.

Chicago signed Wallace to a four-year, $60 million contract in 2006. He has two years remaining on that deal worth roughly $30 million. The Bulls thought he was the missing piece to get them back into contention for an NBA title, something they haven’t sniffed since Michael Jordan retired.

Wallace got the Bulls into the second round in last year’s playoffs. But the team hasn’t recovered from a slow start this season and Wallace is averaging 5.1 points and 8.8 rebounds — his worst season statistically since 1999-00.

“It was pretty good,” Wallace said of his time in Chicago. “It is what it is. It’s one of those things that you come in and you play hard and try to give what you can give and not worry about the things you can’t control.”

“He was a great teammate,” Gordon said. “I think he definitely helped us to get to the second round of the playoffs last season. I guess management felt that they didn’t reach expectations that they wanted him to. That’s part of the business.”

Much like Wallace, Hughes didn’t deliver as the Cavs had hoped. They signed him to a five-year, $60 million free agent deal in 2005, but he struggled with injuries and his jump shot. Recently, though, Hughes had found his touch, which could help the Bulls climb back in the playoff picture.

Hughes had become a target of abuse at Cleveland home games as fans grumbled with every miss and every mention of a contract that seemed untradeable.

The Cavaliers will be the eighth team for the well-traveled Smith, a 32-year-old veteran averaging 11.2 points and 5.3 rebounds. Smith brings the Cavaliers experience and versatility up front.

Gooden, too, can boost Chicago’s inside game. The 26-year-old is averaging 11.3 points and 8.3 rebounds per season.

It’s unusual for two teams in the same division to swap key players and the Cavaliers and Bulls haven’t played yet this season. They’ll meet for the first of four games on March 1 in Cleveland.

Szczerbiak, who was part of the draft day trade that sent Ray Allen to Boston for the No. 5 pick — Jeff Green — and West, added scoring punch in a reserve role for the rebuilding SuperSonics.

He averaged 13.1 points, second behind rookie sensation Kevin Durant, and consistently showed he was fully recovered from offseason ankle surgery. In his final game with Seattle on Tuesday, Szczerbiak was the catalyst for a second-half rally, scoring 24 points, including the go-ahead basket with 31 seconds remaining in a victory over Memphis.

Szczerbiak should get plenty of open looks in Cleveland. With more and more defenses double- and triple-teaming James, the club needs perimeter players capable of knocking down outside shots consistently — something Hughes couldn’t do.

West never found a spot in Seattle’s rotation. Nagging foot injuries shuffled him farther down the bench, and when coach P.J. Carlesimo finally settled on a rotation, West was often the odd man out.

West played in just 35 games, starting only five, and averaged 6.8 points in almost 21 minutes. He played 30 or more minutes just four times all season, after starting 118 games the previous two seasons in Boston.

He could develop into the point guard the Cavaliers have lacked since James arrived.

The dealing by young GM Sam Presti only adds to the flexibility the Sonics will have in their rebuilding process. Combined with the trade of Kurt Thomas to San Antonio on Wednesday for Brent Barry, Francisco Elson and a 2009 first-round pick, the Sonics now have 13 picks in the next three drafts and have acquired three players with contracts expiring after this season.