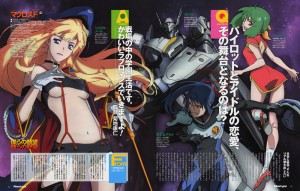 Episode 5 starts with Ozma scolding Ranka about her Miss Macross episode that resulted in her suspension from school, it ended with Ranka running out on Ozma. Meanwhile, Alto and Sheryl are found in a compromising position inside a locker and the story tries to flesh out the dynamics a bit between princess and the famous pop star. We also learn that brain implants that augment certain abilities are common in another Macross Fleet called Galaxy. Not to mention that there are no Zentraedi on Macross Galaxy.

Ozma is then called by command and was given a briefing on the Vajra where a shot down Vajra was being held in a vat of liquid for dissection.

Ranka wanders aorund town looking for Altoh but Michel tries to get her back to Ozma. He eventually challenges her to sings even though no one came to see her sing to test her mettle. Grudgingly, Ranka sings and magically enchants everyone around her…even the dormant Vajra.

Episode 5 ends with a cliffhanger that further expands the series!