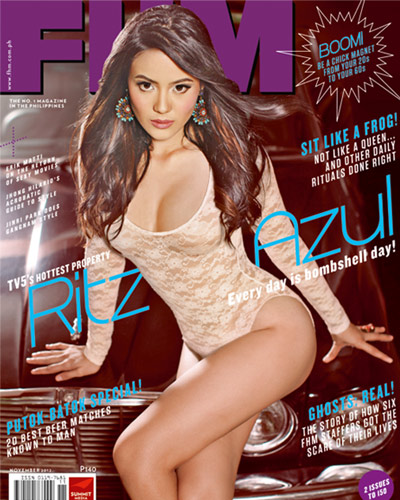 The November 2012 cover girl of FHM Philippines is no other than TV5 primetime princess Ritz Azul, who is wearing a body hugging leotard while sitting on top of a luxury car.

Ritz Azul’s FHM November 2012 cover will be unveiled at the FHM Halloween Party later today at Palladium, New World Hotel. as per FHM: “One thing we’re really stoked about is seeing TV5 actress Ritz Azul, who will be unveiling a blown-up version of her November 2012 cover during the Halloween Ball! And guess who will introduce Ritz to FHM Nation? None other than her equally sexy predecessor, October cover girl Yam Concepcion! ”

This issue is going to be HOT!