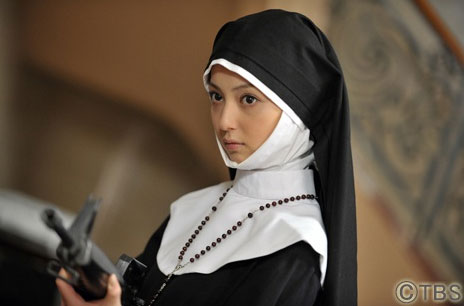 Japanese model Nozomi Sasaki is appearing in an upcoming Japanese television series based on a social networking game as a boss character.

The game is Kaito Royale, a popular cell phone title. Sasaki is a machine gun-packing nun named “Sister Snake”. Kaito Royale centers around a group of thieves and the original game debuted on Japanese mobile phones. As of this summer, the game has over ten million players.

Nozomi Sasaki plays a bad character — which is a surprise to her fans. According to the drama’s creator, that’s exactly why they wanted Sasaki. Kinda like a bad girl with an Angelic face type of character. I definitely dig the way he thinks =)