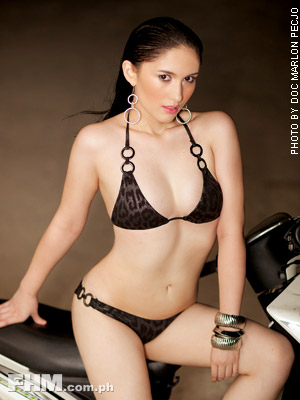 Stefany Marisa Quintos Prescott, better known by her screen name Stef Prescott was born March 29, 1991 in Seattle, Washington, USA and is a Filipina actress. Stef Prescott was an avenger on the Pinoy TV Show StarStruck: The Next Level and was known to be the most controversial of the batch because of her attitude. She was also competing for the title of Ultimate Sweetheart which was later won by Jewel Mische. She was also the representative of the country on Miss Internet World Pageant. Stef Prescott is now on the cover of FHM Philippines magazine June 2011issue.

You looked like a pro out there.
I hardly felt the pressure. I was just thinking of the poses na bagay sa katawan ko, kung ano yung magandang angle and kung ano na something different ang maipapakita ko to our readers.

How long did it take for you to be convinced that this was the time to do an FHM cover?
A couple of years ago, GMA Artist Center asked if I wanted to pose for a magazine. I told them I wasn’t ready because I still didn’t have the body to do it. But I seriously thought about it late last year so I told my mom about my plan. I was really surprised that she supported my decision. Even when I told her that the magazine I was thinking about was FHM. Sabi ko sa kanya na it wouldn’t look bastusin, that it’d be done tastefully. FHM naman celebrates people like me, who’s coming into her own as a woman as she gets more mature and comfortable in her own skin, di ba? That’s what I want everyone to know. Sana rin maging magandang career move ito para sa akin.

Speaking of your mom, we love her already.
Truth is, super conservative ang mom and dad ko. I’m an only child kasi. In the past, she really wanted me to do teeny-bopper stuff or love teams. Kaso, hindi rin naman ako dumaan sa ganun because I started out with a number of contravida roles. As far as the FHM gig is concerned, I told her I wasn’t doing this because super magpapa-sexy na ako, na ang roles na kukunin ko super sexy na. I really just want to show a different side of me sa pictorial na ito.