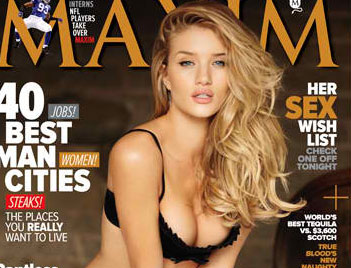 When Transformers director Michael Bay needed to replace Megan Fox as the face of a billion-dollar movie franchise, who did he cast beside Transformers male lead Shia Le Beouf? British Victoria Secret model Rosie Huntington-Whiteley, that’s twho. Rosie Who? She’s The No. 1 lady on Maxim’s 2011 Hot 100 list. I’m starting to like her. I really do.

What’s Dark of the Moon about?
Sam, Shia LaBeouf’s character, has to save the world, and he’s got a new girlfriend, which is my character, Carly. Things unfold a little bit darker than they seem at first…

Is it explained with explosions? This is a Michael Bay movie, after all.
Well, Shia and I are explosive together! The movie begins with us in a new relationship, and then we go from there.
Did you get a feel for just how much Bay loves things that go “boom”?
I don’t think anything is subtle on a Michael Bay set. Everything is 10 times what it is in reality. More fire, more noise, more explosions! Faster, harder…I was thrilled to witness it all

With the trend of models starring in big roles now, do you think it’s fair to take the money out of hard-working actors’ pockets?
Do you think it’s fair that actors have been taking the money out of hard-working models’ pockets? Actresses have completely taken over the fashion industry in the last five years, in terms of big deals. Maybe it’s time the models got some payback.

Being named Maxim’s Hot 100 No. 1 is a start.
It’s a huge compliment. I’m still shocked. It’s a great honor to have in your career.

You recently moved here. Do you miss home?
Every day. It’s my soul, England. I miss the people, the culture, the food…

Wait—you miss the food in England? Really?
Oh, my God, so much! I find it strange that people say English food is so bad. To me it’s delicious. I’ve never really considered it, but I was thinking the other day maybe it’s strange to have beans on toast for breakfast.

That’s what you grew up eating?
I grew up on a working farm. We had chickens, sheep, horses—that’s how we ate.

We hope you didn’t eat the horses!
No! That’s the one thing I didn’t eat. I grew up shooting and hunting. I was a tomboy.

Read the full interview and Photos over at Maxim