Denise Laurel is on the cover of the May 2009 issue of UNO Magazine. 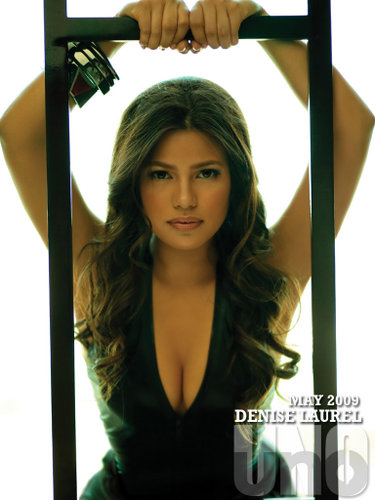 Don’t call her “The Girl Next Door” because there is more to Denise Laurel, the actress and the VJ, than one might think. Denise graces the cover of UNO Magazine’s May Summer Issue and gives a full interview on her life beyond the pretty face.

Tattoo artist Sarah Gaughler is making her mark. The Turbo Goth lead vocalist makes an impact in the music scene as she invades the band scene with their electronic pop music. 2007’s Philippines’ Next Top Model winner Grendel Alvarado makes us wonder how such a beautiful woman could have the name of a monster.

Get exclusive access to the making of the indie film “Sabungero,” starring the legendary Joel Torre, playing a man who unexpectedly finds renewal and redemption amidst the riot and clamor of the cockpit. Plus
What do you get when you mix three Cebuanos and two Manilenos in a band? Whatever you call it, but it certainly makes good music with Franco.

Thanks to the UNO Magazine team for the images and writeup.