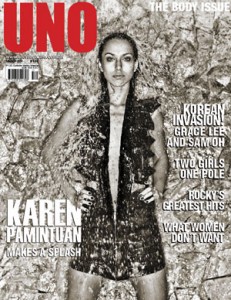 The “Korean Invasion” in UNO Magazine

First, we had the phenomenal Sandara Park on the cover of UNO Magazine’s July-August issue for 2006. Today, UNO Magazine brings you two reasons why we love Korea, the “Korean Invasion” as we put it in UNO.

First up is TV host and radio jock Sam Oh. Though not her first time appearing in a men’s magazine, Sam says: “I don’t think I’ll be going the bikini route again. It’s really just not my thing.” In UNO Magazine, Sam is relatively more covered but still having that class and allure that has made her popular here in the Philippines. Sam adds: “I actually find photo shoots the hardest thing to do. People think—‘Oh, you’re a model; you just stand in front of the camera looking pretty. Not true!”

Turn the dial to Magic 89.9 at 6 in the morning and you will be hearing the lovely alto of another Korean beauty Grace Lee. She co-hosts the notorious radio talk show Good Times with Mo alongside DJ M Twister and DJ Mojo Jojo. UNO brings you the face (and the body) behind the voice.

As a radio jock, Grace Lee listens to everything from Josh Groban to the Eraserheads. She loves movies and her favorite is “Love Actually.” On men, Grace prefers headstrong guys to geeky mama’s boys.

Grace dishes out on her experience on stalkers: “I had a stalker once who sent me gifts and flowers, and texted me over and over again. Thank God, he eventually stopped. That’s the thing with stalkers: at first, it could get really flattering, then the next it becomes something straight out of a horror movie.
Hahaha.”

Sam Oh and Grace Lee, our favorite “Koreanays” are on the March issue of UNO Magazine with TV host / model Karen Pamintuan on the cover.

1 thought on “Karen Pamintuan on the Cover of UNO”