Lucy Pinder, British hottie and model, is an extremely big fan of Xbox 360 and a regular user of Xbox Live, according to UK tabloid Daily Star. They write: 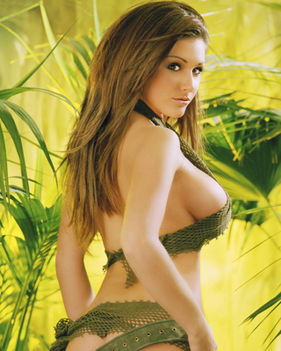 Watch out next time you go online with your Xbox for a battle – you could be fighting Lucy. She takes NO prisoners and she takes it seriously,” the unnamed source told The Star, adding that Lucy has assembled a “model league of gorgeous gaming babes” who have busy lives but “like to relax with their consoles after a hard day’s modelling.?They love taking each other on with [sic] their Xbox games.

Xboxer.tv seems to have hit it on the head: “One of two things has happened here. Either Microsoft has given the Daily Star some money, like it did with tabloid rival The Sun, or everyone at the Star is simply TOTALLY FREAKIN’ INSANE.”

They even didnt use Gears of War 2 and it’s awesome HORDE co-op mode. *sobs*