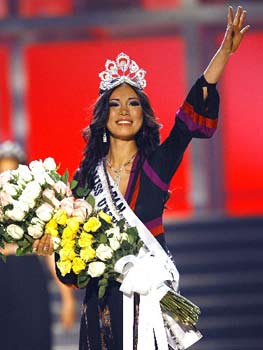 Images of the Top 5 women in the Miss Universe 2007 Beauty pageant after the jump. 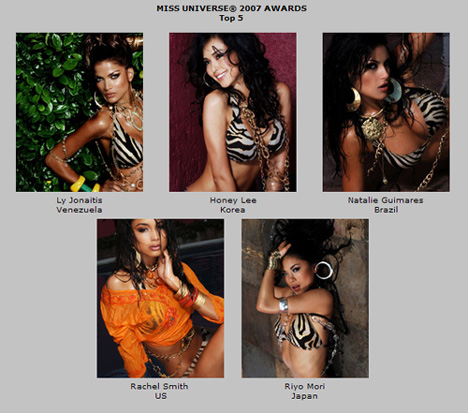 This evening, during one of the yearâ€™s most exciting live international television events, a star-studded panel of judges chose Miss Japan, Riyo Mori, as MISS UNIVERSEÂ® 2007

Ms. Mori is 20 years-old and has been dancing since she was 4. She loves traveling the world and enjoys visiting museums and watching musicals.

Throughout the two-hour event, contestants from 77 countries around the world competed in three categories: swimsuit; evening gown; and personality interview. Zuleyka Rivera, Miss Universe 2006, crowned her successor at the conclusion of the two-hour primetime telecast, before an estimated worldwide viewing audience of more than 1 billion in over 170 countries.

The Miss Universe Organization, producers of the MISS UNIVERSEÂ®, MISS USAÂ® and MISS TEEN USAÂ® competitions, is a Donald J. Trump and NBC Universal partnership. Utilizing its global grass roots infrastructure, the Miss Universe Organization is committed to increasing HIV/AIDS awareness by focusing on women’s health and reproductive issues. By forging relationships with organizations committed to research and education such as the Latino Commission on AIDS, Global Health Council and God’s Love We Deliver, Miss Universe is armed to impact women today.